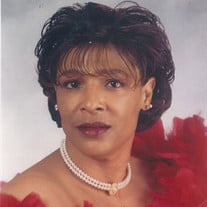 ADRIENNE MARIE BROWN Forestville - Adrienne M. Brown, 68, died unexpectedly April 4, 2022, at University of Maryland Capital Regional Medical Center. She was born November 10, 1953, in West Point, NY, the daughter of MSgt Oscar D. Kemp and Charlotte (Sykes) Kemp. Raised by military parents, Adrienne and her siblings were raised all over the world, with her favorite country being Germany. She was a fierce protector of her younger siblings, but she also had no issues with correcting any of their behaviors if she felt they were misbehaving. She graduated from Fairmont Heights High School, class of 1971. Following graduation, she attended University of Maryland where she met her future husband, Marshall Brown. In their sophomore year at Maryland, Marshall joined the Navy and they married. Adrienne spent time in California as a Navy wife and eventually caring for their newborn son Michael Maurice Brown. They eventually came back to Maryland making it their permanent home. At which point, Adrienne went to work for the Post Office. Adrienne was a loyal member of The Order of the Eastern Star. She was a voracious reader and spent a great deal of her youth with her head buried in Nancy Drew mysteries. She loved watching tennis and enjoyed a good card game as well. In addition to her parents, she was predeceased by her brothers, Rodney Avery Kemp and Donald Alan Kemp. She is survived by her son Michael M. Brown, grandson Michael Maurice Brown Jr., sister Jacquelyn Kemp Reinauer, nephew Alan Donnell Kemp, Nieces, Caitlyn Shelby Reinauer and Paige Reinauer Meacham, Esq., grandnieces, Amber Simone Kemp, Ava Michelle Kemp and Arin Bailey Kemp. A service of remembrance will be held at Pope's Funeral Home, 5538 Marlboro Pike, District Heights, MD, on Thursday April 14, 2022 with a viewing beginning at 10am and the service to begin at 11am.

The family of Adrienne Marie Brown created this Life Tributes page to make it easy to share your memories.